Yesterday and today – a story of tradition and progress.

The first telephone in the town of Ardmore was installed in the local store in 1908. For many years thereafter the few citizens with telephones in their homes would carry messages to their neighbors.

In the 1950’s the system was owned by the Fount Merrill family and he officially incorporated Ardmore Telephone Company. It became one of the first Tennessee companies to apply for a loan 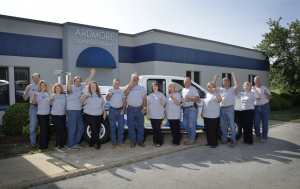 from the Rural Electrification Administration to install 90 miles of copper cable and a new dial office in a commercial building.

This began two decades of further modernization by the Merrill family, including buried cable and one-party service system-wide.

Today Ardmore has over 6,500 customers in four counties, with all-digital offices and 150 miles of fiber optic cable. The company’s purchase by Synergy Technology Partners in 2009 has brought Ardmore even further into the future.

Synergy, owned by West Kentucky & Tennessee Telecommunications Cooperative, brings over 60 years of rural telephone experience. For customers, this means an even wider array of services and products, with faster Internet speeds and more options for service packages.

So Ardmore Telephone doesn’t just straddle the state line, it resides comfortably in both the past and the future. Where neighbors used to scurry about delivering messages on foot, now it’s digital messages carried at near the speed of light, but the commitment and responsibility shown are essentially the same.

Our pledge to you is to continue to build on our strong historical foundation, offering the best technology and customer service available anywhere at competitive prices. At Ardmore, we intend to make your telephone and Internet choice an easy one.

Keep up to date on news, information and announcments concerning Ardmore Telephone services and support.

The Ardmore Connection Magazine is a bi-monthly publication that includes a variety of current topics and info about our company.